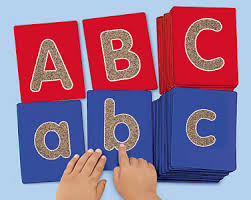 Learning the sounds of your letters and what they look like is one of the first and most important steps in the early learning process. Sounds are taught first and letter names later with ABC Trace and Say. Learning to form lower case letters first, and the capitals later, or as needed, is also part of the ABC Trace and Say program.

For example, it is useful to teach a child the capital letter that their name begins with so that they can correctly write their name. When a child has mastered these foundational principles, they are better able to focus on transferring their thoughts to paper.

Scroll back to top